History of the Burlington Path 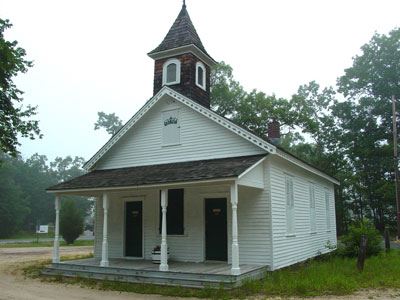 In 1684, New Jersey's Governor Lawrie established a road connecting the 2 capitals of New Jersey. This road connected Perth Amboy (capital of East Jersey) and Burlington (capital of West Jersey). The road was named 'The Burlington Path' or 'The Great Road' and also had the name of the 'Old Indian Trail' - named because this was an important route for the Unami Clan of the Leni-Lenape tribe when they went to the seashore to collect their winter store of oysters, clams, shells, etc.

Travel at that time was by stagecoach. The stage operated on regular schedules and took between 3 and 4 days to travel from Perth Amboy to Burlington in one direction. Winter travel was not possible along this route until 1750. Around 1770, the trip between New York and Philadelphia took only 4 days one way. The Burlington Path followed the ridge or watershed along its route. In 1796, by an act of the State Legislature, the name was changed to Monmouth Road, which we now know as County Route 537 or Main Street.

Coming from the eastern part of the county, the Burlington Path started at Long Branch and joined the Minnesink Trail at or near Middletown, then to Tinton Falls through Colts Neck, where it took a southwest course to Freehold, traveling down Main Street for a considerable distance. The path then made various turns through the pines and farm country slightly south of town to Crosswicks. Upon reaching Crosswicks, the path divided: one branch went to the Trenton Falls and the other to the Delaware River.

In 1765 the stagecoach stops were:

The Stone Tavern stood until 1968, when it was destroyed by fire. It was located about 4 miles southeast of the original Monmouth County Court House on what is now Gravel Hill Road. The walls of the building were said to be 3 feet thick. General Knyphausen used the tavern as headquarters on June 25, 1776, on his way to the Court House during the American Revolution.

Joel Parker, who was twice governor of the State of New Jersey, was born in the Smithburg Tavern, which is on the corner of Siloam Road and Route 537. Governor Parker served from 1863 to 1869 and again from 1873 to 1875.

On their march from Philadelphia on June 18, 1778, General Henry Clinton's troops stopped at the Willow Tree Inn (Tavern), Clarksburg and Stone Tavern, in the vicinity of Upper Freehold Township near Stone Lake, reaching Freehold on June 26, just 2 days before the Battle of Monmouth. He made his headquarters in the Covenhoven House on West Main Street.

The word "tavern" referred to an inn or hotel, as well as a place to get refreshments on long trips. There are stories of horse races that took place between Willow Tree Tavern and Stone Tavern. The driver who finished last had to buy drinks for all the race contestants.