It is found throughout much of the United States. Although occasionally biting humans, this species differs from the other 3-host ticks of medical or veterinary importance, as it normally parasitizes domestic dogs in all active life stages. In more northern climates, this tick can become established indoors and is often found associated with kennels, households, and other areas frequented by dogs. Under ideal conditions, the brown dog tick can complete its life cycle within 1 year.

Adults are found most often in the ears and between the toes of dogs. Larvae and nymphs attach frequently in the long hair at the back of the neck. The female deposits her eggs in cracks and crevices near dog resting spots. The male tick can often be found mating with the females while they are feeding. This tick, as do most ticks, has a strong tendency to crawl upwards: hence, it is often found hiding along the underside of window frames or on curtains. The eggs hatch in 20 - 30 days, depending on the temperature. The life cycle corresponds to that of other three-host ticks, that is each stage (larva, nymph and adult) must feed on a dog before dropping to the ground and molting to the next stage. Indoors these engorged ticks usually make their way into the cracks and crevices near baseboards or in the floor.

Successful control of brown dog tick infestations requires good sanitation, application of pesticides to the premises, and control of ticks on the animals themselves. When cleaning the home or kennel, pay particular attention to bedding and resting areas. Infested dogs should be treated by a veterinarian on the same day that the infested premises are. Treat infested areas with residual sprays or dusts, remembering to treat the upper portions of structures and in cracks and crevices.

A list of approved pesticides for brown dog tick control can be found at the New Jersey Agricultural Experiment Station website. 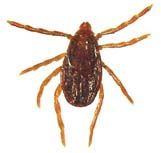 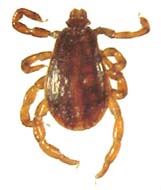