The precise reasons for the rapid emergence of Lyme disease and other tick-borne illnesses over the last 25 years are not completely understood. Early theories linked disease emergence to the rapid rebound of white-tailed deer populations since their virtual elimination at the end of the 19th century. However, the resurgence of the deer population, in response to reforestation and significant reduction in hunting pressure in the Northeast, occurred much earlier than the emergence of Lyme disease as a serious public health problem. A more likely explanation for the emergence of Lyme disease in New Jersey involves what has been termed "suburban sprawl" and the accompanying changes in how we develop the landscape. Over the last 50 years or so, there has been a tendency for people to leave cities to live in more rural areas. Initial suburban communities were often created by clear-cutting of forests prior to the construction of homes. However, in the 1970s, many county and local governments responded to a growing environmental sensitivity by changing zoning laws to increase lot size and requiring developers to retain as much of the natural vegetation as possible during construction. This shift in development strategy had the unintended consequence of placing more and more people at risk of encountering ticks.

Examining the Lyme disease model can demonstrate how development of residential communities within forested habitats may contribute to the emergence of these tick-borne diseases. Maintaining significant amounts of natural vegetation to serve as buffers and greenbelts creates a patchwork of interconnected woodland. Because of firearm discharge restrictions, these wooded patches within residential developments serve as islands of refuge for deer and other wildlife during hunting season or during development of adjacent lands. Also, as surrounding forest land is lost to development, these areas tend to concentrate deer, the principal host for the reproductive stage of the blacklegged tick. Other mammals, such as raccoons, opossums, squirrels, and chipmunks readily adapt to new residential environments. Woodpiles, brush piles, stone walls, landscaping ties, and outbuildings provide cover and nesting sites for a variety of small mammal hosts of immature blacklegged ticks. The use of bird feeders and introduction of companion animals and, in some cases livestock, also provide additional hosts. People moving into these types of wooded rural environments from more urbanized areas are generally naive regarding ticks and tick-transmitted diseases and less aware of preventive measures. Concentration of ticks and their hosts in proximity to a human population with low awareness of the risk of tick-borne disease may well have contributed to the emergence of Lyme disease and other illnesses.

Although most cases of Lyme disease are acquired from exposure to ticks at or near the home, similar risk factors are present in other settings. In some recreational areas, wooded camp sites, picnic areas, nature trails, and fitness courses may pose substantial risk for encountering ticks, while use of athletic fields and courts, where tick habitat is generally lacking, results in little risk. Frequent exposure to ticks may be common with certain outdoor occupations that routinely place people within tick-infested areas. Consequently, the ability to recognize tick habitats is of paramount importance. 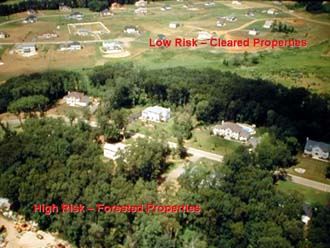